Applying One of Dossie Easton's Lessons

Some of the weekend activities involved random pairings of gender, orientation and role determined only by the sequencing of two circles of people being told to rotate one step for the next exercise. I found these challenging and liberating and I will write more about them another time.

One exercise which most couples did together, with a swap and a repeat, was to introduce both shibari and trust play. I described it in an earlier post, so I wont repeat it here. But that post includes a photo of a typical chest harness on Bandree.

At Nimhneach last Saturday, I decided to try the same exercise. I will let Bandree describe it from her perspective first:

"Led by my Leader

Master Retep has asked me -well, told me - to describe my reactions when he blindfolded and restrained me and then led me about among other people a few nights ago at Nimhneach.

I had known that He was going to do this and of course i have often been tied before.

The blindfolding was much less familiar for us: i have pretty awful eyesight so i tend to feel either very insecure or very “free” when i can't see. We had experimented with this, as He described, at a Tantric/BDSM workshop a few weeks ago.

The chest harness was quite tight and the blindfold was dark and he led me confidently. Sometimes pushing, sometimes pulling, which added to the disempowerment in myself and increased my reliance on Him.

It is conventional to claim that a person deprived of one sense has heightened awareness in the others – well, i never noticed that before last Saturday. In fact usually i can't listen to the radio without my specs on!

But because my master's strong hand was guiding me, i was not scared or insecure at all: i had to trust him and to go where he directed. The sounds were on various sides like aspects of scenery – music here, dancing there, people chatting, spanking sounds and little yelps! How odd to walk through sounds like driving through a landscape!

My feet were cautious but my master murmured to me – Little step – edge of dance floor on your right – etc. And i could feel the wooden edge and the dreadfully sticky carpet – why don't the management ever clean it? I felt cool air blowing as we passed between rooms and the indefinably new acoustic of a different space, the tantalising whiff of tobacco, the feeling of “less crowded” - hard to explain, that one, especially as occasionally one would brush against my arm or jostle briefly with a murmur of apology.

Then he told me to bend over and i could feel the edge of a bench against my thighs, so i knew what was coming...

But i didn't know what he was going to use: only what it felt like. Sharp, sudden stripes of pain flashing across my behind. Again, and again. A pause, then more. I've got to admit, he handled it beautifully. What might have been frightening, or alarming, was strong but safe, sharp but not scary.

My bottom did think it recognised one implement, a short strap that is regularly used at home for ordinary discipline. And other, more severe things too – riding-crop, maybe?

I was darn glad when that bit was over, all the same - and i was led back to our table. He waited a while, talking gently to me, and then took the blindfold off, slowly. Immediately i felt that it had all ended too soon – that i could have stood a good deal more – that we had quit too early – i am often like that at the end of a session, whether “play” or real life.

Recognising this, Master Retep left me in the ropes for the rest of the evening, sometimes cuffing my wrists together too.

What were the results? It increased my trust in him, and that was good. Of course it made me hungry for more....that happens! And i think it increased his strength in himself, if you know what i mean – leading me confidently with my safety in his hands.

Was it sexy? Yes. The restraint/blindfold part was edgy, puzzling, because unfamiliar: that uneasiness added to my arousal. The spanking was extremely sexy of course! What about the “being seen in public” angle? Didn't really bother me because my attention was focussed on other things.

I was pleased with the exercise. I was acutely aware of my own responsibilities for ensuring that my charge would not trip, bang her head off objects, interfere with someone elses scene or get struck by a back flying flogger. When you are responsible for someone whose wrists are secured with limited travel and who is blindfold, you must do all their watching out as well as your own. For me, this constant attention and management was an intensly empowering masterful experience.

I definitely intend to repeat this with Bandree at the next Nimhneach and I would be prepared to consider requests from others who might be interested in the experience.

EmmaJane has written a very insightful piece in which she says:

"Not every top is comfortable with this. Tops need reassurance too. They need to know that they haven't gone too far, that the scene worked, that the tears are ok, that the tears will stop".

This has resonated with my own thoughts on the subject. One of the things I find challenging is managing the boundary between authoritarian disciplinarian and being a compassionate lover or play partner. The problem is that in TTWD we are administering punishment, often genuinely painful, because its what the bottom wants. The want may be as obvious as the desire for the endorphin rush and the bodice ripping thrill or it can be as serious as a need for genuine atonement for nasty or selfish behaviour. Whichever, it is still done to satisfy some need in the bottom. If that were not the case, we would be dealing with straightforward criminal abuse.

Therein lies the rub. To maintain our own self confidence that we are not abusive sexual predators, tops require supportive feedback. The post scene hug is as much for us as for you. An intense scene can leave me trembling. There is some deep truth in the old chestnut "this is going to hurt me more than it hurts you". The more you care for your subject, and if you don't care you shouldn't be doing this, the more intense the shared aftermath is going to feel.

EmmaJane's revelations will help us to understand why, sometimes, we may feel rejected at the very point of climax. For a top, a period of isolation after the event can seem like a rejection, like a judgement that they "got it wrong". We are humans too, with emotional needs, and I think that we need reassurance that we didn't overstep the line into abuse, nor left our subject underwhelemed. For me, I detect that reassurance in the body language of an embrace much easier than in the possibly stilted language of some spoken words. EmmaJane has taught me that, sometimes, we need a little patience before we can be given our answer.
Posted by Master Retep at 6:20 AM 3 comments:

I know that it has been sometime since I promised to post something about the Radical Ecstasy weekend with Dossie Easton. I have been busy and there was a lot to digest before being able to put words on it.

There were a number of different exercises involving personal interaction throughout the two days. This is just one from the second day. We were introduced to Shibari with the suggestion that we secure a partner, playing a sub role, in a simple chest harness. This is a rope configuration which allows the subject's upper torso to be securely held. When this step was complete, the sub's eyes were covered with a blindfold. They were then manipulated using the Shibari rope. What I mean by "manipulated" is that they could be thrown off balance in unexpected directions, but securely held. Anyone who has played the group "trust" game of falling backwards into the hands of the group will recognise the dynamic, but for us BDSM types, it is delightfully edgy. We then led our charges around the room. Ensuring that they did not collide with anyone, or trip on anything, really reinforced the essential nurturing role of a good top. 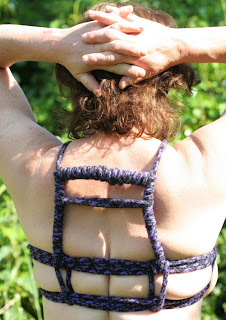 As part of the exercise, we reversed roles and repeated the process. (The Radical Ecstasy weekend took us all out of our comfort zones, be they gender, orientation or role). One of the things I noticed about being a blindfolded sub was the intense awareness of the sounds of what was going on around me.

I intend to bring a length of Shibari rope and a blindfold with me to Nimhneach. I imagine that any sub would find the experience of being led to an A-frame whilst blidfolded, depending only on hearing to get a picture of what was going on, to be a sensual one. We will see how this works and I'll post feedback - if any!
Posted by Master Retep at 8:57 AM No comments: 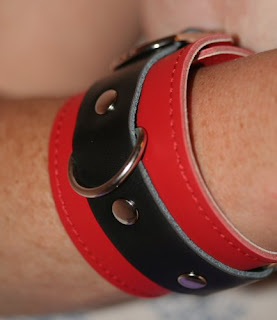 Last night, I slept shackled to my Bandree.

When we went to bed, I placed a small red leather cuff on each of her wrists and clipped them together. I then placed a third cuff on my own left wrist and clipped it to her cuffs with about 4 inches of chain. I confess that, on this attempt, I released the connection to my cuff during the night. The last time we tried this, we stayed coupled, albeit with a slightly longer chain, all night.

Bandree slept all night with her wrists close coupled. We have done this several times in the past, including variations such as securing her wrists to a thigh cuff. The interesting point is that she sleeps soundly, usually reporting afterwards that she felt safe and secure. I find it is an effective intervention when she needs centering and calming.
Posted by Master Retep at 8:47 AM No comments: