To start with a "one liner" (literally) follow up to my November Nimhneach post. That last cane stroke is still visible on Bandree's left cheek on this, St. Stephen's day, 5 weeks later. We are both impressed.

December 19 saw us all back at the Academy for "The Last Blast of 2009". The vibe was good and many costumes distinctly seasonal. We were thrilled to have Bandree's homemade bra nominated on Fetlife, by our lovely friend J, for "Best Costume Award". 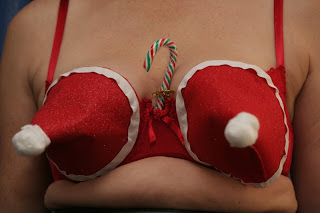 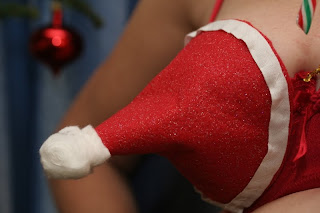 Its amazing what Bandree can achieve with some felt, a couple of cottonwool balls and some safety pins. Which reminds me of the old joke of the woman who asks the man in the Chemist's shop if he has cottonwoool balls, to which he replies "What do you think I am, a feckin' sheep?" And on that note, no, I'm not going into any further speculation about the polar bear's more intimate details. 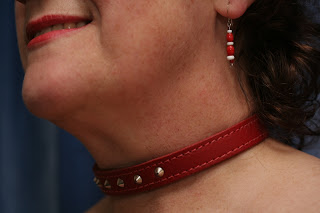 Bandree also managed to carry the festive colour scheme through to her accessories. Her other motifs for the night were peppermint creams and the discovery that Jelly Babies and Aero Bubbles are excellent together, eaten one and one.

It was a great night for costumes and friendly chat and we made some new friends, as one does at 'Nimh, and met up with some we hadn't seen in a while - you know who you are.

The title for this blogpost was inspired by a post on the BDSM-Ireland Yahoo site in the days preceding Nimhneach. The poster was proposing the possibility of bringing 12 or so of their work friends along to Nimhneach after their office Christmas Party. There were a couple of replies in the normal supportive welcoming line, suggesting ways of meeting the dress code etc.

In the heel of the hunt, some of the party lost their nerve, and the trip never happened.

Now I know that Nimhneach is a public club event, that anyone who meets the dress code, summons the courage and pays their door admission, is welcome. I also don't doubt that at any given Nimh', there are a proportion of one-off speculative visitors. Indeed, it is only by welcoming such visitors that we can help other people to discover and come to terms with their kinks or sexuality. That diverse, tolerant, welcome is one of the great strengths of the club.

Despite all that, I will admit to a sliver of intolerance at the idea that we might become the floor show for an office party "afters". If the whole party were going to be tolerant scene supporters, then their workplace must be like the set of "Secretary" and they don't need the Academy. If, on the other hand, they are a normal mixed workgroup, then the plan looked at risk of provoking shock and, maybe, outrage. At a PC extreme, the last thing Nimhneach needs is to be highlighted in some stupid workplace sexual harassment case.

Am I being overly cautious? What do you all think of the idea of vanilla parties coming along as groups to scene clubs? This is a purely academic question to spark interesting discussion. I am perfectly happy with the public access feature of our club and I am not for one moment suggesting that I would like a membership type approach, as is common elsewhere. If our club was like that, I, for one, would never have got past the front desk.

Wishing you a Happy Rest-of-Christmas and hoping that you all have the lovely 2010 you great people deserve.

November was a good Nimhneach.

There were some rival kinky attractions in town which meant that it started a bit more quietly than usual. However this turned out a benefit in the end because it left a bit more space for meeting people and chatting.

I was glad to see Caroline and Frank up from the floodplains. Caro did an excellent suspension on stage with DommyDarko and she has a very expressive description of the sensations, together with some pictures, on her blog.

Later in the evening, we got to play together. To my great pleasure, she agreed to experience the trust exercise which my Bandree described when we first played it together at the August Nimhneach. Although myself and B have now worked through this exercise several times, both at Nibh and elsewhere, it was very interesting for me to experience it with someone else. Caroline is tall. That adds an extra dimension (well, OK, more of the same dimension) when you are throwing someone back, face up, and then standing them up again, supporting them only by gripping a rope harness between their breasts.

What I particularly like about the combination of blindfold, chest rope harness and wrist cuffs, is the total submission it provokes in the sub. No matter how strong willed or opinionated, once someone has submitted to be in that position they have effectively surrendered control. If they cannot reach the blindfold, they daren't run, lash out or do anything else rash for fear of hitting themselves against something, tripping or falling. It is a surprisingly calm and peaceful way of ensuring that you have someone's undivided attention. It is also a very good lesson in responsibility for any Dom. Every step your sub takes depends on your attention and care.

There was other good stuff that night. My B took quite a number of punishments, including three very stern cane strokes with her wrists cuffed to the top of the cage. The last of those strokes is still clearly visible high on her left buttock, quite uncharacteristically, three weeks later.

We greatly regretted missing the electroplay workshop, but we got to speak with Lektro (the visiting lektrurer, sorry) near the end of the night. Bandree's interest was definitely aroused, so that's something else to put on the bucket list.

We hope we can make it to December, though ordinary life is kind of busy, and look forward to meeting our newfound playful friends.
Posted by Master Retep at 8:40 PM 4 comments:

My Bandree had another attack of self doubt. Admittedly, things have been very busy and stressy in our day-to-day world, but yesterday, she went too far.

Any reference by me to playing or other players produced a sniffy smart-alec put down or other rebuke. Everybody else was younger, sexier, subbier, dommier or whatever.

By late afternoon, I had had enough of it. We had reached a deserted location and my Bandree was immediately pushed over a straight backed chair. Nowdays, I never put on a pair of trousers without a suitable belt. The jeans I was wearing were matched, as usual, by the thick brown leather belt I had bought, in her company, in Cheyenne during a recent visit to the US. At that time, we both knew exactly what I was doing when I bought that belt.

Folded double, I brought it down on her bottom, producing sharp yelps even through the trousers she was wearing. She didn't wear them long, though. Singling the belt, I dragged her pants and knickers down. With each swing of my belt, I pushed her back down whilst chastising her for her lack of self respect. I will not have anyone, not even her, bad-mouthing the woman I love, desire and adore. I emphasised each of her virtues with another swing of my belt - her gorgeous clear skin, her sexy legs, her just-right breasts, her wonderful openness to new ideas and exploration, her sense of humour, her kindnesses to others, her erotic effect on me, her happiness in her new role as rope bunny to my fumbling rigger efforts. I reminded her, with another swing of my arm, of how proud I felt the previous evening when she chose to complement the red ribbon bow I had tied through the top pair of her labial rings by wearing black suspenders and stockings. She had looked delicious. How dare she run herself down.

When I had finished she was crying and apologising. I turned her to face the wall for a few moments, to consider her lesson and the importance to me of how she views herself, particularly in comparison to others.

I know that it is a female competitive thing, and sure, we are not youngsters at the start of our sexual careers, but living in our present (rather than our pasts or futures) we have it good. I have a sexy, aware, intelligent, brave, funny, friendly good looking, submissive woman for my wife. I can fear what will happen in the future, I can regret that we didn't discover all this years ago. But with age comes confidence and wisdom and I believe those are the qualities which most enable me to enjoy this lifestyle.

Whilst my B was facing the wall, I noted, again, with pride for both of us, the clear outline of a cane welt she received from me at Nimhneach two weeks ago. This is special because her lovely, cared for, skin doesn't usually hold marks for very long at all, 24 hours would be noteworthy. So she was right when she had commented that her Nimhneach caning had finished with a hard one.
Posted by Master Retep at 8:20 AM 3 comments: