I have certainly growed up. I have had to confront subliminal prejudices which I had intellectually rejected years ago but had never really been called upon to challenge. I now realise that the Radical Ecstasy workshop, run by Dossie Easton, last summer was the watershed. That was where I had to grit my teeth and confront close contact, both physical and emotional, with strangers of all gender and sexual orientations. Before you get all excited, there was nothing debauched going on. We all kept more clothes on than the clientele of the average gym, but we spent two days being assigned partners for differing relationship exercises. Key words - "being assigned" - no participant choice here. It was down to random positioning. When we took up our places for any exercise, we didn't know if it was one or two circles, clockwise or anti-clockwise progression, there was no comfortable line dancing predictability for the knowledgeable or the cute.

The effect wasn't instant. Its only now that I can see my own discomfiture relaxing at anything other than conventional male/female contact. Being an intellectual liberal is piss easy, you only have to bullshit about it. To publically, even in a scene setting, hug another bloke because you are a dom and they are a sub, and they need to be comforted, is a considerable step beyond a business-like embrace because you're at a meeting in Paris and we all know the French are funny that way.

In my relationship with Bandree, my wife of 31 years and my lover of 34, the last year has felt like a public declaration of our wedding vows, and more, all over again, but with an added twist of really knowing what we mean. It has also prompted much discussion between us about our relationship, about our beliefs, about our moral principles, and about ageing.

We are both in the second half of our fifties and, unlike some noteable names, we were not founder members of alt.ssanything. Sure, I know that I probably have it easier in that there will always be a demand for silver haired schoolmaster looking types (though I'm not a schoolmaster) but I still have days when I ask myself what kind of silly ageing hippy am I consorting with people less than half my age in a nightclub or at a party at 2am. I don't have a particularly hairy chest but I still feel that all I am missing is that stupid big medallion and dangerously large motorbike.

Then I recall the affection, concern and respect that I have seen these friends show for one another, regardless of age, desires, body shape or taste in fashion. Why am I so self aware? Because, lets face it, we all are. Even in this most non-conformist of social groups, I am watching very carefully to learn the etiquette, to blend in, to not appear gauche or crass. It is, of course, the role of the Dom to take the lead, to be assertive, to establish the rules. There is, however, a conflict when the Dom is relatively new to an established scene. The role carries inherent responsibility, and its not that easy to act confidently and responsibly whilst still trying to work out what is going on and what all the different relationships are.

I have been surprised by, and take comfort from, the number of our new friends who have approached us with supportive remarks. These are generally along the lines of "we're really pleased (for which the cynical could read "surprised") that you have joined our scene with such enthusiasm". Well, there is a saying that youth is wasted on the young and I suppose if the interweb had been around earlier, we might have discovered all this a few years ago. But it wasn't and we didn't and so here we are now, wiser, sexier, more experienced, confident and eager to learn.

We don't want to lose it, so we better keep using it.
Posted by Master Retep at 9:00 PM 6 comments:

"Mark my words, she'll be biting that pillow before she's finished." 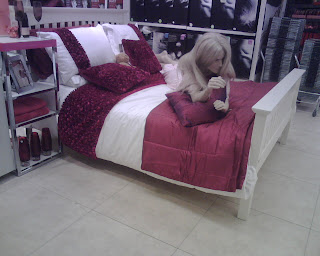 With those words, my Bandree greeted the bedding material display in our local Marks & Spencer store.

For some reason, my brain had been in pervertible mode all day. Only half an our earlier, we had encountered a mobile domestic discipline service. 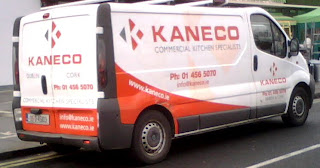 The environment was somewhat noisy, so there was no way of telling whether the operative was making a service call at the request of some exasperated master, or was just having a lunch break.

Back at M&S, we circled the bedding display, amazed at how a kinky context can be missed by so many. Hell, I even had to wait 10 mins to take the pictures because a tired shopper plomped her behind down only inches from this one. 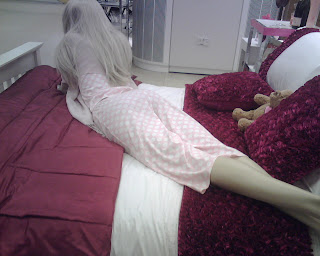 If you study the picture below, you can even visualise another bottom underneath HER hand. The outcome of all this was that I made an unplanned purchase in M&S. Not any bedding, you understand, just a lovely wide leather strap from the Men's outfitters section next door. 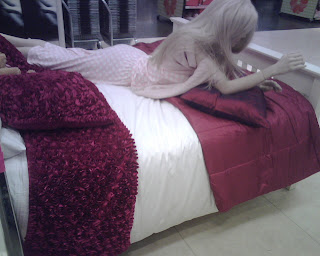 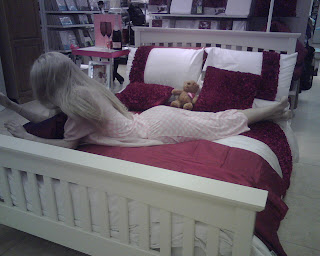 Posted by Master Retep at 9:34 AM No comments: